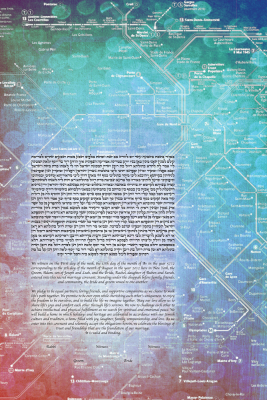 
Originally opened in 1896, the Paris Metro is most known not only for it’s extensive lines, but also for it’s uniform architectural design. Heavily influenced by the Art Nouveau style and constructed under the direction of Fulgence Bienvenüe, the Paris Metro is one of the most beautiful transportation lines in the world.

Holding true to Parisian style, the metro’s aesthetic has been upheld and preserved, even during renovations. Le Metro Du Paris Ketubah is perfect for the couples that not only love city life, but specifically the beauty seen in Paris. This Ketubah reflects the best from both modern and vintage Paris.