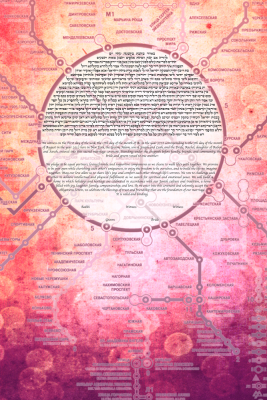 Moscow’s Metro is an interesting reflection of Russia’s political history and how that blended with the world of art. First opening in May of 1935, Stalin opened Moscow’s metro as a method of displaying Soviet realist art.  Art work seen in the original stations not only gained national recognition, but international attention as well.

The architecture seen among the Moscow metro, although politically fueled, is some of the most gorgeous works of art seen in the history of the world’s metro systems. Thus making the Moscow Metro Ketubah a beautiful tribute to both tradition and gorgeous art.