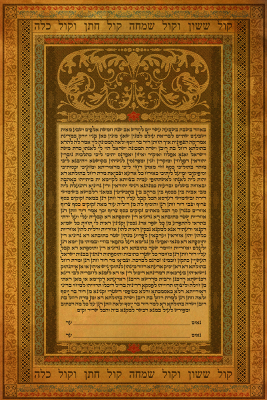 
Jews have been a small but constant community in Morocco, since the destruction of the Second Temple. In Morocco for centuries, the Jews mixed heavily with the local Arab population — influencing the Jewish Moroccan dialects, traditional foods, and even the tunes of their classic Jewish prayers.

This Ketubah is an alternate version of The Moroccan Ketubah, with an elaborate design at the top and a more geometric format. The Moroccan II Ketubah is based on the traditional Ketubot of the Moroccan Jews, particularly their mid 19th century style of Ketubot. In this Ketubah, you can see the subtle Arabic influence on the Moroccan Jewish style.The text is decorated on the top with an elaborate representation of the voussoir, adding an importance and glamour to the text. It frames the texts and incorporates the seventh sheva brachot above and below.


All Ketubot are Limited Editions of 500 each, and optionally include a Certificate of Authenticity.