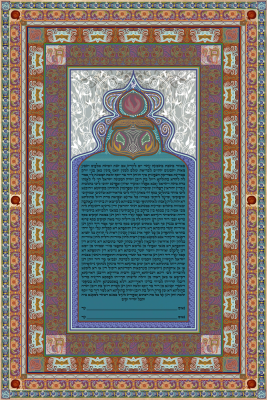 
Susa (“Shushan” in the Bible) is one of the ancient cities of the Jews of Persia. As the Capital of the Persian Empire in the era of the Bible, it was the home of not just thousands of Jews, but of the administration of the Persian empire. But perhaps most importantly, Susa is, of course, where, according to our tradition, the Prophet Daniel is buried.

The Ketubot of Susa are in the traditional Persian Ketubah style, with all of the ornamentation that is customary. Deeply influenced by the ancient Persian Isfahani aesthetic, the Ketubah merges the Persian style with the elements of the Ketubah and Judaism as well, including the six pomegranates around the edge of the Ketubah and the four chais in the four corners of the inner frame.

Artist Recommendation: This Ketubah looks particularly stunning on wood! Click here for more information
All Ketubot are Limited Editions of 500 each, and optionally include a Certificate of Authenticity.