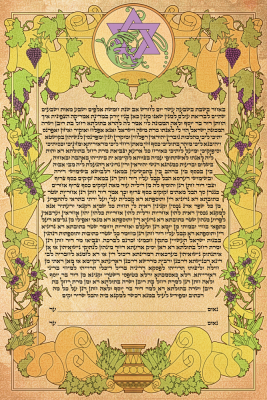 The Jews flourished in Vienna during the height of the Austro-Hungarian empire — despite a history of Jewry in Vienna that is filled with high highs, and low lows — and still today, the Jews of Viennese descent tend to retain one of the strongest connection to the country, as compared to most other Jewish emigrant groups.
The Jewish culture of Vienna was famously intellectual — birthplace of Wittgenstein, Popper, and endless Jewish-Viennese intellectuals — the Ketubot of Vienna reflected that tradition. Unlike the Sephardi ketubot, which were decorated with flair, the Viennese Ketubot tended to be viewed as Legal Contracts. Thus, they were, aristically, among the most reserved and conservative ketubot. Yet they do retain a very distinctive style, often framed, in the art, by the seven species and Jewish symbols such as the Magen David. But the framing is always simple, and with minimal colors; an understated elegance.
Click Here to See the Full Vintage Ketubot Gallery
Artist Recommendation: This Ketubah looks particularly stunning on wood! Click here for more information
All Ketubot are Limited Editions of 500 each, and optionally include a Certificate of Authenticity.