As Ketubah lovers, we love seeing bits of Jewish tradition and culture in everyday life. We recently stumbled across this photo of David Beckham: 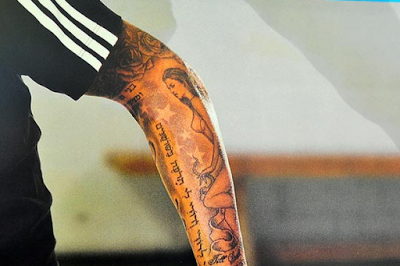 and of course the first thing that jumped out at us… his Ani L’Dodi tattoo! Among his many tattoos, David Beckham got Ani L’Dodi in Hebrew tattooed on his arm — and it’s no coincidence that it’s right next to the tattoo of his wife, Victoria Beckham. :)

Ani L’Dodi (I am my Beloved, and my Beloved in mine) is a phrase commonly seen on tons of different Ketubahs — everything from super Orthodox Ketubahs to even more modern styles. Many couples that we’ve worked with in the past have even specifically asked to add that phrase into their Ketubah. Such a beautiful and powerful phrase to say to the person you love… it even resonates with those who aren’t of Jewish heritage!

After seeing David Beckham’s tattoo, we were curious to see how many celebrities throughout the world have Hebrew tattoos — and there were a TON! Who knows what reason they have for getting a Hebrew tattoo, but we’d like to think that they find beauty in such an old and culturally rich language. :)

All that to say — it’s awesome to see the impact of Jewish culture and Hebrew language throughout the world! We get so excited when couples come to us wanting a Ketubah and requesting something in Hebrew with a language translation, whether it’s in English, Spanish or even Chinese! There’s nothing quite like a stunning Ketubah to represent the joining of two people’s lives, styles, and even cultures.

If we had to guess, Victoria and David Beckham probably didn’t have a Ketubah for their wedding day, but if they did we can imagine what phrase they would be asking for!