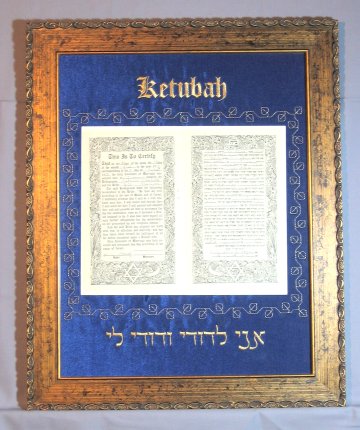 (That is NOT one of our Ketubot – but a traditional one.)

Some keep it hidden in a safe.

Some prominently display it in the center of the house.

Some keep it in the wife’s parent’s house.

My grandmother still has hers, framed, in the center of her living room; but my parents, I have no idea where theirs is.

How should you decide what to do with your Ketubah? Well, one predominant factor is the culture: Sephardim, for example, tend to keep it out of sight more, while Ashkenazim tend to flaunt it more.

We would suggest that, the decision as to whether to show off the Ketubah or not rests firmly on three criteria:

Secondly, how safe is your living space: if your home is secure, then it makes more sense to display it in your home. If you live in a group living situation, or there are often robberies in your area, you might want to protect it to a greater degree.

Where in your home would you put your Ketubah?