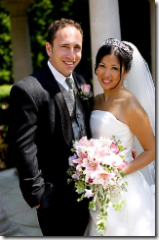 In the modern world of the 21st century, many Jews marry people who were not born Jewish in interfaith ceremonies. What kind of Ketubah is good for them?

The Jewish-Asian couple is, in particular, a common pair: for at least 20 years, Jews and Asians have been attending awesome universities together, and building cool companies together in the Bay Area and it’s no wonder that more than one friend of ours has referred to Asians as “the New Jews.”

In addition to satisfying the traditional requirements of the Ketubah — and, obviously, in addition to being high quality, modern, and just awesome and cool, while being different and uniquely designed for the couple, not to mention, maybe even fun! — it would be wonderful to appeal to Asian aesthetic sentiments. How so?

Asian artwork has a long and beautiful history. Indeed, it feels awkward to group traditions as different as the Chinese, Japanese, Korean, Thai, Malay, Indian and many others into one group — they are so different from each other! But they all do share one characteristic: they are far removed from the common aesthetic traditions practiced by most modern Ashkenazi and Sephardi Jews (although tiny communities in these countries do remain).

Our preference, here at This Is Not a Ketubah, is to incorporate the best of both traditions and creating personal Ketubahs and customized Ketubah artwork for all couples we work with. We love exploring different types and styles of art and design, and working closely with the couples to create Ketubahs that reflect their styles, designs, and traditions. The Asian style on a Jewish Ketubah is a beautiful mix. Soon we will publish a couple to our site — or if this might interest you, let us know!