Dating back to more than a century ago, origami is the ancient Japanese art of paper folding. The word ‘origami’ is the combination of two words: ORI means to fold and KAMI means paper. Origami structures are so simple, children make it. Yet, they look sophisticated enough that many are used as decor in high society parties. The art has passed down from generation to generation, and has recently crept into pop culture.

The first time I heard about it was from the TV show Prison Break where the lead character Michael Scofield constantly folds origami swans leaving them here and there in prison. They made an appearance again on the House of Cards when Claire gets an origami bird in return for cash to a homeless man, prompting her to make origami animals and giving them to Peter Russo’s children.

The wish of a thousand origami cranes

Origami animals have been whirled up in Japanese legends. A popular one is the legend of a thousand origami cranes which states that anyone who makes a thousand origami cranes held together by a single string will be granted a wish by the Gods. This inspired  Sadako Sasaki, a Japanese girl who was 24 months old when she was exposed to radiation from the atomic bombing of Hiroshima during World War II, developing leukaemia as a result. She heard of the legend and began making the cranes but according to a popular version of the story she only made 644 before she died. Today a memorial of her holding an origami crane stands at Hiroshima.

The latest addition to our gallery is the origami ketubah collection. Each featuring origami paper cranes dangling in the air above the text of the ketubah by string. The Paper Crane Ketubah below features eighteen birds, instead of a thousand, the classic Jewish number that also means “chai”, or “life”. It is available in more colors and designs. 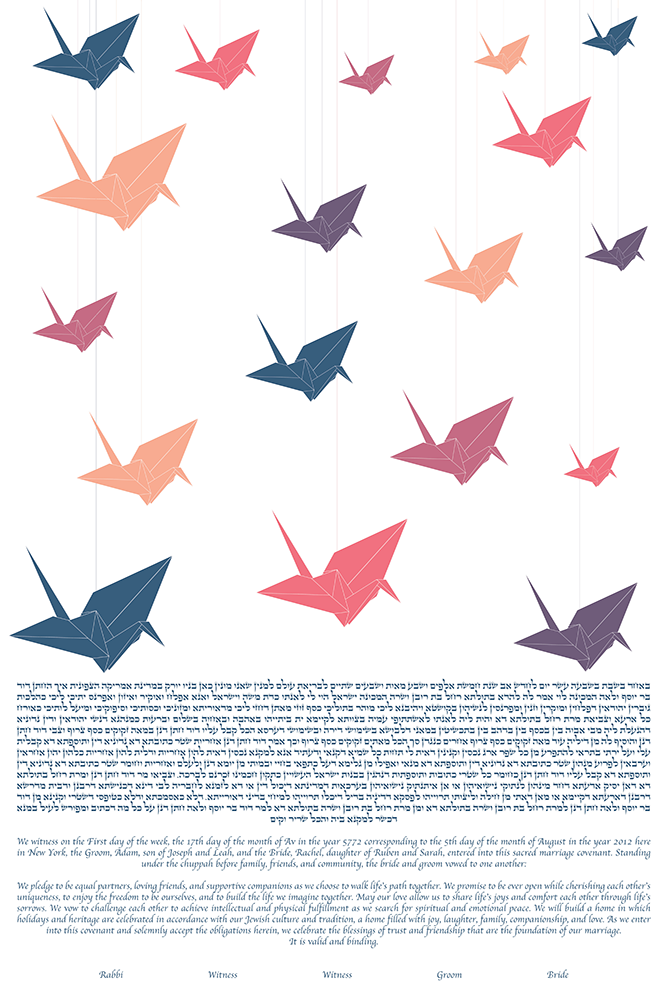