The community on Pinterest has shown Team Ketubah some incredible inspiration of design, color, and tradition. We’ve also found some hidden treasures of Jewish Weddings from the distant and recent path both far and near.

The latest great find? A Ketubah from a traditional Jewish wedding in Bombay from 1911. Stored in the archives of the Beinecke Rare Books and Manuscripts Library of Yale University, this Ketubah has been beautifully preserved and called on many modern themes of its day: was the slanted writing an intentional move by the artist, or just a quirk of hand-made art? 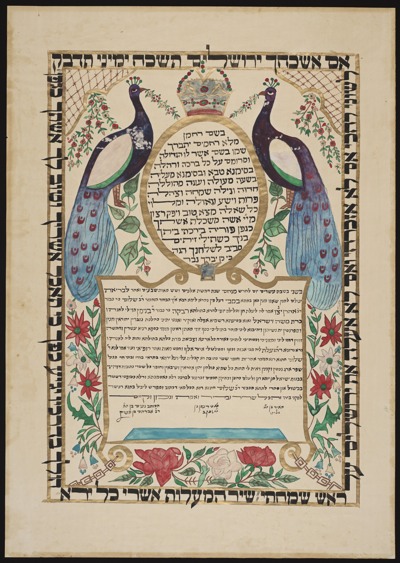 The piece may have faded over the years (it recently celebrated its 100th wedding anniversary, literally!), but here at Ketubah HQ we got really excited about how the bold colors of the freshly painted Ketubah must have lit up the room, and brought pure joy to the ceremony.

The Jews of Bombay have among the most interest stories! Believed to be a mix of transient Iranian Jews and those said have arrived on shipwrecked trading vessels from Portugal in the 1500s, and created thriving Jewish culture until the early 1900s. Today, most Indian Jews have emigrated to the United States or made Alyiah to Israel, but this Ketubah from the Old Country still gives us shivers!

We’re excited to re-pin this incredible find, and keep the creativity flowing! Whether your wedding will be a traditional ceremony with a Conservative text or a think-outside-the-box Interfaith Ketubah, Team Ketubah is here to help! Have an awesome image on Pinterest and want to keep us updated? We’re excited to re-pin it and share the excitement!