Meeting One Of Our Couples 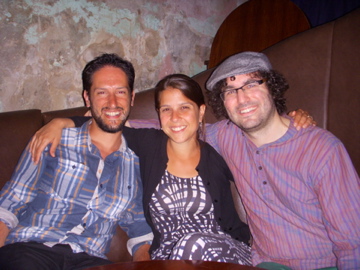 Morgan from Team Ketubah meets one of our couples

(Note: this is a continuation of Part I, where I was speculating about what it would be like to meet one of our couples in person!).

So it finally happened: we met one of our couples in person. Craig and Neta, who fell in love with the IRT Today Ketubah, came to Argentina on their honeymoon. I ended up hanging out with them twice, book-ending their trip. It would have been more, had they not spent most of their honeymoon in the middle of nowhere Argentina, aka Bariloche.

I was very excited for the moment, since it would be a milestone. All previous couples of ours that I’ve met previously have been friends of ours. But these were downright random people, who found us using the Interwebs. Anything was possible. Mass murders? You do need to be crazy to come to Argentina, after all! Heh ;)

The first time we met was in my apartment. It turns out, the two of them are passionate about New York subways also — this is why they loved our IRT Today Ketubah! I, too, am a subway fanatic, and the walls of my apartment are covered with old-time subway maps, and we spent a long time discussing the history and details of the subway system, sharing stories about the old maps, and engaging in otherwise nerdy conversation that would put 99% of everyone to sleep. It was wonderful although, of course, they’re thinking, “The Morgan character, he can babble about obscure topics!”. We also helped them solve some crises they ran into, like not being able to get any money here!

The second time we met, we went to a great bar just past the Palermo limits. Above photo taken (I’m the one on the right, wearing a shirt I bought in Bombay!). They updated me on the hipster Williamsburg scene — apparently, I left years ago and then it became cool: typical! — and we analyzed in detail the sociodemographics of the New York Times wedding announcements. It was a fun night, of course full of alcohol.

I kept on thinking, if they lived here, I’d invite them to join my group of friends every Wednesday night when we hang out!

Conclusion: All of our Ketubot include, as an extra bonus, one or two very fun nights of drinking and conversation. If you ever make it to Argentina ;)